The Anova Culinary brand is synonymous with quality and precision when we talk about Sous Vide. Anova offers low-temperature, precision cooking through their Anova Precision Cooker series of sous vide cookers.

It is this experience that places Anova machines among the best and most complete Sous Vide brands that we can find in the market today.

Anova offers three different sous vide cookers in their Precision Cooker line and each one makes it onto my Top 10 Best Sous Vide Cookers list.

I’ll get into the general Anova Precision Cooker features, benefits, and specifications of each one. There’s a lot to cover, so let’s get into the details.

Anova Culinary Precision Cookers are designed and made to bring sous vide cooking to the home chef. Home cooks are able to enjoy the techniques that professional chefs are utilizing to incredible results. Nothing better than perfectly cooked steaks.

What are Anova Sous Vide Cookers known for? 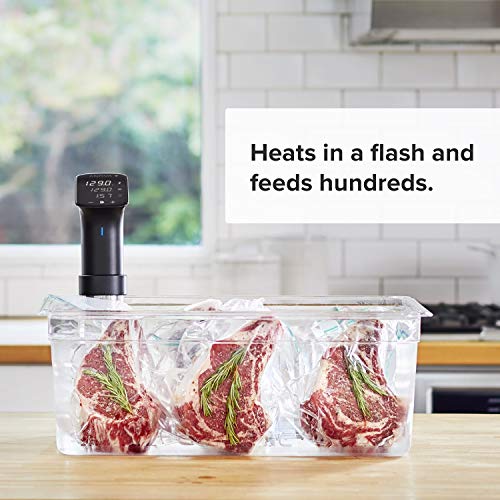 Let’s take a side-by-side look at the three immersion circulators and their technical specifications. It’s always easiest to see the differences between them in a handy chart.

The LCD screen shows all the information related to our cooking such as cooking time, current temperature, or remaining time until the food is ready. 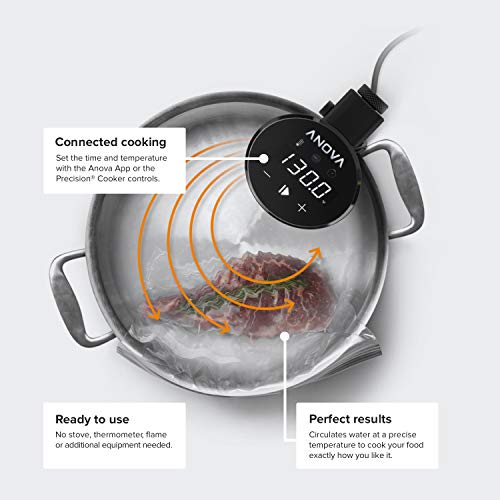 It is very simple to program, and although we can do everything through the mobile app connecting through Bluetooth or WiFi. and the application of Anova on our mobile phone, its screen panel also allows you to manually select any recipe to follow. 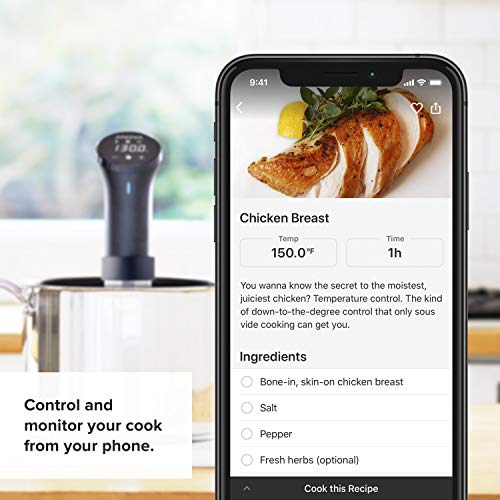 As a pioneer in the world of Sous Vide machines for the home, Anova is always at the forefront of innovation in bringing sous vide cooking to us home chefs. They’re always looking to make it as easy as possible for us to enjoy perfect meals.

The Anova app gives you the ability to start, stop, change the temperature, set the timer, and monitor the status of your food. You can also get notifications on your phone with updates on the cooking status.

The Anova App is loaded with thousands of recipes and guides from Michelin star chefs and home cooks. Anova claims it’s the largest collection of sous vide recipes (I didn’t count so I can’t verify). There are definitely a lot, including recipes by James Beard Award-winning chefs, celebrity chefs, food editors, and more.

A great feature is Anova’s Guided Cooking where they’ll give you step-by-step instructions to follow. You’re able to start cooking with the Anova Precision Cooker on those settings through the app. 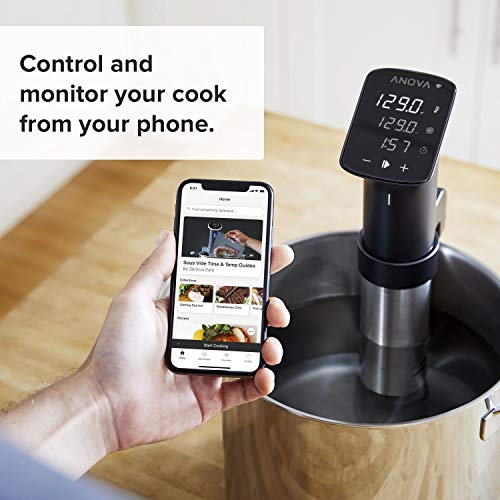 One of the hardest things about sous vide cooking is knowing how long to cook certain foods and at what temperature. Anytime I don’t need to remember all those numbers is always a good thing.

For the home chef in all of us, you’re also able to create and save your own sous vide recipes that you can then share with friends. The app will also keep a history of all your meals as long as you record it in your personal profile. That’s a nice feature to keep track of all those meals.

Nano vs Standard vs Pro

There are three different Anova Precision Cooker versions and which is the right one for you?

Another way to look at the differences and which model is right for you is to think about how many people you’ll be cooking for.

The Anova Nano will be the one for you if you’re single or a couple. The Anova Precision Cooker Standard is the one for a family of 4-6. The Anova Pro is best if you cook for more than 6 people at any time. 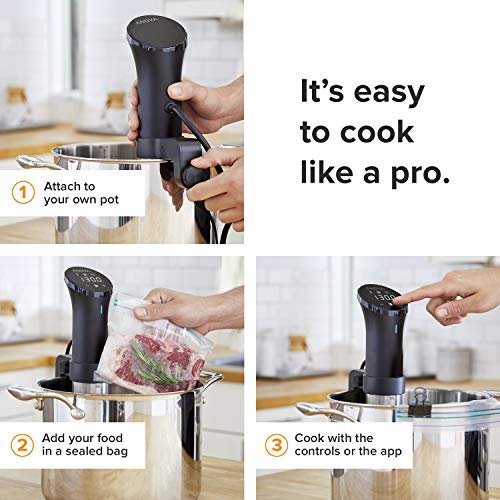 The Nano is the smallest model of the Precision Cooker series lineup. It’s great in that it’s small enough to fit into a drawer. If you cook for yourself and/or another person on a regular basis, the Nano will get the job done. 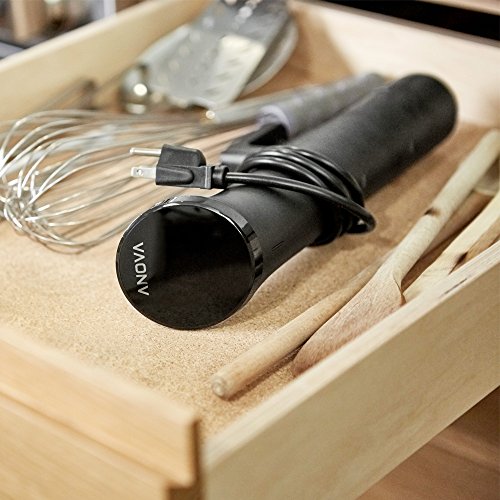 The Anova Precision Cooker is the middle model and the Best Seller in the Anova sous vide family. It has the perfect mix of features and functions for the average family of four. The other models provide better uses for smaller and larger families.

The overall value that you get with the Precision Cooker is why I thought it was the Best Overall Sous Vide Cooker out of all the others I’ve reviewed.

The top-end Anova Precision Cooker is aptly named the Pro. If you’re looking to cooking for many people at one time or even startup your own home sous vide cooking catering business, the Pro was made for you.

Anova says the 1200 watts of power will heat up to 100 Liters (26 Gallons)! Unfortunately, I haven’t tried to cook in that big of a water tub, but the challenge is enticing. 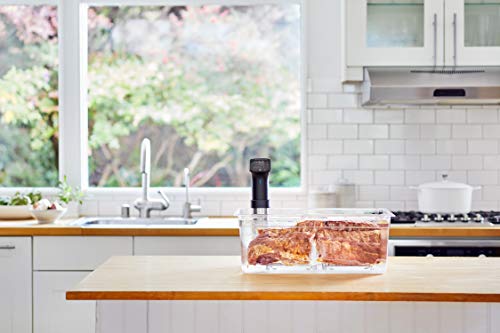 Let’s take a look at two at a time to get an idea of which one will meet your needs better:

The main differences between the two are the design, weight, power wattage, and wireless connectivity. The Nano and Precision Cooker Standard are the same height, with the Nano being slimmer with that sleek all-black exterior.

The Standard Precision Cooker has more power at 1000 watts, while the Nano has 750 watts, so the Standard is able to heat the water faster and more suitable for larger water baths. Wireless capabilities is also a difference with the Nano being Bluetooth-only, while the Standard has WiFi.

The Pro is the top of the line sous vide cooker from Anova. The main differences between the Pro vs Precision Cooker are the sizes, power wattage, and materials for durability. The Pro is larger all-around (13.5″ and 5.16 lbs) to be able to house the power of 1200 watts, while the Precision Cooker is 1000 watts.

Durability of materials is also stepped up on the Pro with Teflon-Coated Aluminum and Stainless Steel, while the Precision Cooker is Plastic and Stainless steel. If you’re prone to put your tools and appliances through the wringer, the Pro will be able to withstand more punishment.

Once you’ve decided to buy an Anova Precision Cooker or another sous vide immersion circulator, you’ll be looking at accessories to better sous vide cook.

If what you want is to start with sous vide cooking, there are certain supplements that we recommend 100%. A case to protect it and be able to take it anywhere, a bucket, a lid, a grid to separate food in the water, some ping pong balls that reduce heat loss, food sealing covers, and maybe if you feel like buying although there are other methods to do it, a vacuum sealer.

The number one thing you need is a container or pot. Pots are great, but they’re usually smaller and not transparent. Polycarbonate containers are more popular and the standard for sous vide cooking because you’re able to easily see your food. Containers are also rectangular or square-shaped, so it’s easier to organize the placement of your vacuum sealed food bags. 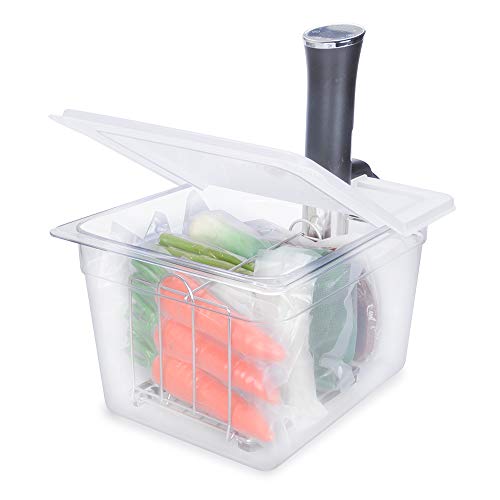 This EVERIE Sous Vide 12 Qt with Collapsible Hinged Lid and Rack is a popular choice because it’s easy to get in and out without taking the whole lid off. The opening is also custom made for the Anova Precision Cooker Nano and Precision Cooker Standard.

Note: Be sure to double-check the product descriptions when purchasing lids that’re custom-fit to certain sous vide immersion circulators.

And of course, Anova has their own containers custom-made to fit their Precision Cooker lineup. They’re designed with smooth and curved edges so water circulates as optimally as possible to heat the water faster than any other container. 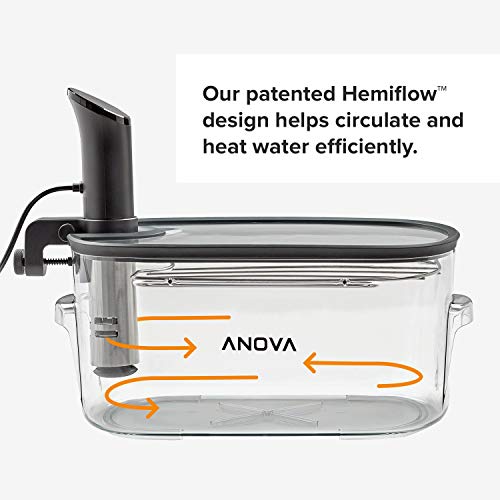 In addition, with the lid included, it prevents steam leaks and maintains the cooking temperature in the most precise way. 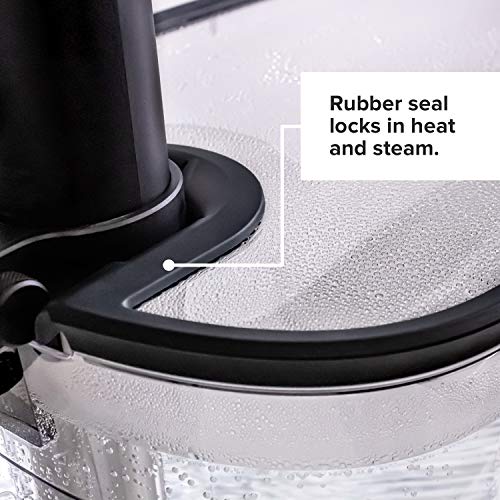 If those features aren’t enough, there’s a rack that helps to hold your vacuum sealed bags underwater. If you’ve sous vide cooked, you know how bags can sometimes float to the top, leaving some parts of the food that are not submerged. The integrated rack top prevents that. 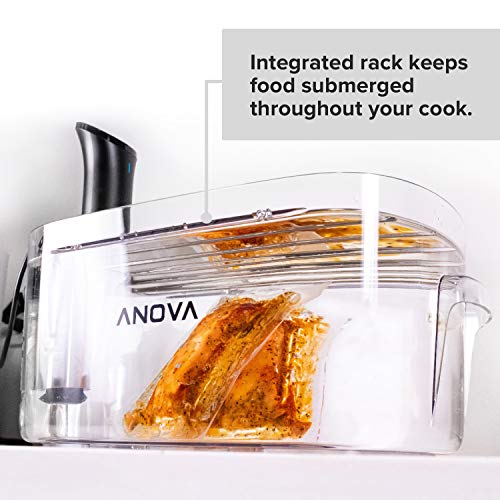 Anova Precision Cookers are top of the line sous vide immersion circulators. If you know that sous vide cooking is going to be a regular part of your life, it’s hard to go wrong with Anova products. They offer restaurant-quality sous vide equipment at consumer prices for the home chef that wants professional tasting food.

Anova products are higher quality and you can feel it when you pick one up. Anova Precision Cookers come with a 2-year warranty and a 100-day money-back guarantee. If they don’t believe in their own products, they wouldn’t do that.

Check today’s prices on Amazon for each model: