Skip to content
Disclaimer: There may be affiliate links, which means I may receive a commission if you sign up for a free trial or purchase through the links, but there is no extra cost to you.

Brisket is a favorite food of many people due to its tenderness and delicious flavor. Brisket can be hard to cook with other cooking methods like grilling, because you’re never quite sure what the temperature is inside the meat.

This Sous Vide Brisket Recipe will help you make perfect brisket every time without the hassle! 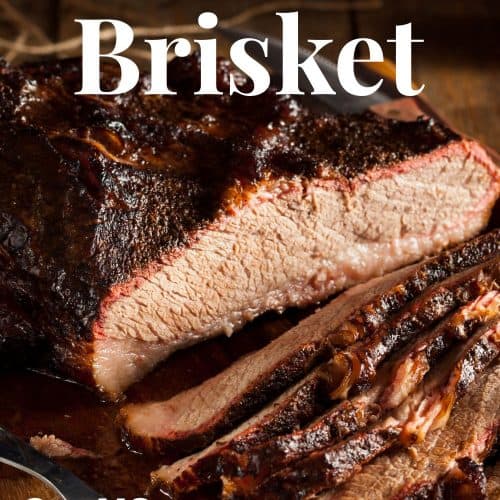 Potatoes are a great side dish for the brisket too.
Keyword Beef, Brisket, Steak

Brisket is considered to be the “holy grail” of barbecue. It’s one of my favorite foods and can be found almost anywhere in America. But most of the times, it’s dry and bland brisket.

There are two main factors for that. Brisket is tough and lean, so it needs to be cooked for a longer time. Slow-cooking can bring out the best flavor in every part of a pig; even its tough shoulder meat is tender and flavorful.

There’s no secret sauce that will make it easy for anyone to smoke perfectly moist, tender brisket. But if you nail every step of the process from start to finish, you can enjoy tender, moist brisket whenever you want.

Even though sous vide cooking can take longer than traditional methods to prepare, the end results are consistently excellent because of the consistent, uniform cooking conditions that are provided by this method. This makes sous vide cooking the perfect choice for busy folks who want a perfectly cooked meal every time.

Sous vide cooking offers convenience and can cook food evenly, which is why it’s an incredibly effective technique.

With sous vide, we’re not using hot, smoky air to gently break down connective tissue and infuse flavor. You don’t need to buy an expensive barbecue just to have really good barbecue.

It doesn’t take much more than time, dedication and a good set of tools to make really, really good barbecue. Barbecue that’s covered with a thick, crispy bark that turns light pink as it gets close to cooking. Then the meat takes on a deep smoky flavor that melts in your mouth.

Barbecue brisket is one of the harder cuts of beef to cook properly. At 135°F (57°C), it doesn’t soften or lose its structure, so it’ll still be rather tough. You would need to cook it for about 72 hours for the meat to start falling off the bone with a spoon.

Cooking at 145°F (63°C) will allow it to break down the meat more, but be drier than cooked at lower temperatures. This temperature still allows you to cook the brisket at a temperature that breaks down the muscle fibers while keeping the meat moist.

I get the best results at around 155°F (68°C). As the meat continues to cook and release moisture, it will get softer and more tender. I like to cook it for 27 hours as in the recipe, but anywhere between 24 and 30 hours will be good.

There are two cuts of brisket: the flat cut and the point cut.

If you are looking to flatten your stomach, the flat is a good place to start.

The flat cut is similar to a flank steak as it has little marbling and a fat cap on top. The point cut is a triangle-shaped cut that’s on top of the flat cut. It has much more marbling, so it’s more moist and tastier.

The point cut brisket is more more preferred as it’s more forgiving when cooking, so it works for everyone from beginners to experts. The problem is it’s hard to find point cuts at your supermarkets. Most of these are sold directly to restaurants.

When buying a flat cut or point cut, look for more marbling (intramuscular fat) in the meat. If it’s too lean, it’ll probably end up more dry.

What Type of Rub Should I Use?

Most people only use salt and coarse ground black pepper, or their own homemade barbecue rub with other spices. I mostly only use my own salt and pepper.

If you’re not already using your homemade rub, I’d suggest you make it for the next time you grill, and then you won’t have to worry about it when you’re not planning on grilling.

Should I Inject a Brine?

Brine involves injecting liquid into the beef. Injecting a brine with salt can help prevent the brisket from drying out and adding flavor to the meat if desired.

The liquid is injected under pressure into the muscle tissue. This forces out the water in the meat and causes the muscle to firm up. It also acts as a preservative. How much brine to use for a particular cut of meat is determined by the size of the cut.

To Smoke or Not to Smoke?

Brisket cooked over a hardwood fire with plenty of wood smoke in the oven will give you a nice smoky flavor, but it won’t have as much of a thick black bark on it as the pit cooked briskets do.

If you like the smoky flavor that’s part of the traditional BBQ meal, definitely smoke the brisket.

Read more about whether it’s best to Smoke Before or After Sous Vide.

Do check out other sous vide recipes. These are some popular ones: