Gourmia has certainly made strides with their sous vide cookers. Taking a look at the Gourmia GSV-130B model. This Gourmia Sous Vide Cooker is a low cost and elegant sous vide machine that is easy to use. It’s a good entry-level unit to buy if you’re new to sous vide cooking.

But be aware that it doesn’t offer nearly as many security or convenience features as some similarly priced products. Let’s take a quick look at the technical specifications before getting into the features and benefits. 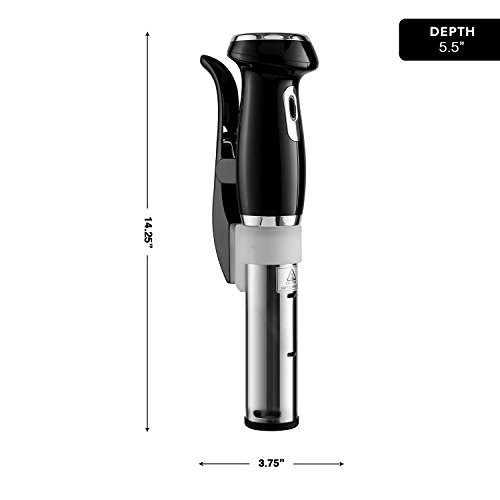 The Gourmia Sous Vide is a good, entry-level sous vide immersion circulator due to its low cost and ease of use. The GSV130B is a good way to bring precision, low-temperature cooking home for the home chef who wants to create perfect steaks, chicken, fish, and more.

Gourmia calls it the Immersion Sous Vide Pod, let’s see what features this Pod has. 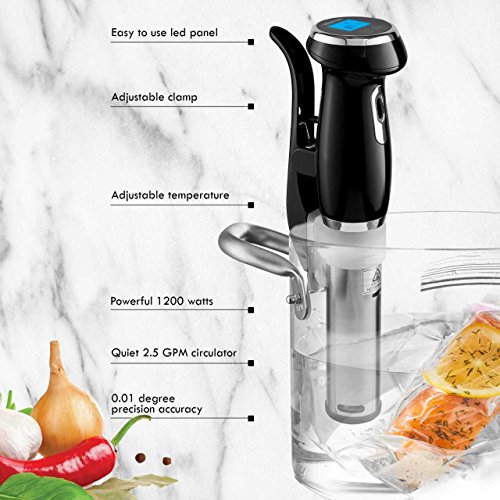 With 1200 Watts of power, the Gourmia machine packs a big punch. For budget level sous vide machine, it’s rare to see that kind of power.

The heating portion of the cooker will reach temperatures up to 203°F / 95°C. It’s rare you’ll ever need to go to such a high temperature in sous vide cooking, but it’s good to know at the least.

The heating element also has two holes that show the maximum and minimum water levels. All immersion circulators have these, so you can easily and quickly keep an eye on appropriate water levels.

Starting at the top, literally, is the LCD panel where you operate and control the immersion circulator. You have the On/Off buttons and the Set button to set the cooking temperature. The LCD display will show the information about what temperature was set (Celsius °C or Fahrenheit °F), the actual temperature of the water, the cooking time, and the timer.

A downside to the screen is that it’s small and faces up. This means that you can’t check the temperature from further away. You’d need to walk over to the Gourmia machine and look at the LCD display from the top. If it was slanted at an angle, you’d be able to see it from far away.

The adjustable clamp is easy to use and will hold your sous vide cooker upright and vertical in most sous vide containers and pots. There’s a heat-safe plastic shielding you from the heat of the device, so it won’t be hot to the touch when you’re done cooking and want to clean up.

The Sous Vide Pod is easy to use and a cool feature is the Variable Time and Temp Wheel at the top. If you’ve ever set cooking temperatures by pressing + or – buttons, you’ll like the wheel. The wheel allows you to turn to set your desired cooking temperature. I’ve found that it’s much easier to turn the wheel than to press the + / – buttons. You can hold those buttons down, but they’ll often skip 10 degrees at a time if you hold too long. 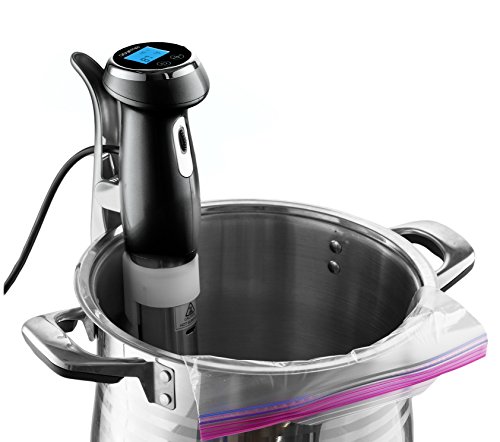 1.5 gallons of water per minute is continually circulated to maintain even and precise temperatures all around your container when cooking food. That allows your food to cook evenly throughout, no matter its location in your pot or container.

The Gourmia sous vide cooker is able to heat up to 5 gallons of water, which is about 20 quarts. 20 quarts of water will allow you to cook enough food for 4-6 people. Just be sure to get a container that big or you won’t have enough food for you family. I review the best sous vide containers in another post.

An ETL certified product means that it’s been tested to a set of safety standards by Intertek’s Electrical Testing Labs.

The Gourmia sous vide immersion circulator has been certified by ETL, so you can rest assured that you’ll get a safe, efficient, and high-quality sous vide machine.

The Gourmia GSV130B comes with a user manual that has a handy step-by-step cooking guide inside it.

It gives you a useful chart of times and temperatures for different types of food. The Gourmia Immersion is to make everyday cooking easy, healthy, and delicious.

In addition to this safety issue, a narrow clip and low water level range limit the type of containers this unit can be used with. With a nominal capacity of 3.5 gallons, its capacity is substantially less than the capacity of competing 5 to 10 gallon sous vide cookers. This means that you cannot cook as much food at once.

The Gourmia Pod isn’t the prettiest, unlike the Breville Joule, but it also isn’t the ugliest. It looks like most of the other immersion circulators out there.

Although the design may be lacking in some respects, it offers a simple, intuitive interface and easy-to-use functionality. With a small screen and two buttons on top, a spinning wheel on the side of the grip, similar to the Anova, the Gourmia Pod’s configuration is easily adjustable.

If you don’t want to, you’ll be able to quickly understand how the Gourmia works without the user manual because it’s simply designed.

Features are all great and good, but let’s see how it actually performs.

Setting the temperatures and timings weren’t the greatest, but it was simple enough. It’s just the lack of feeling when pressing the buttons. The button doesn’t go down to give you that button press feel. It was a little weird at first, but I equate it to a smartphone button press. Just wasn’t expecting that from a kitchen appliance.

Our tests found that the Gourmia Sous Vide Pod heated up the water in a quick amount of time and shouldn’t be surprising given its 1200 watts of power.

The steak and chicken turned out well on separate occasions. The Gourmia didn’t vary off the set temperature, so that’s good. Temperature variance is one of the most important aspects when looking for a sous vide immersion circulator. You don’t want the temperature to be a full degree off because that would overcook or undercook your food.

It’s important to note that the Gourmia GSV130B has no Wi-Fi or Bluetooth wireless connectivity, which in part explains its lower cost. Many other sous vide machines have this convenient feature that allows you to remotely control the machine with an app.

While the Gourmia Pod doesn’t have a wireless feature, this is only a problem if you plan to control the machine from an external location. If you plan to cook while at home, this missing feature will not be a problem for you.

The Gourmia Sous Vide GSV130 immersion circulator a great buy for entry-level video enthusiasts who don’t want to spend that much money initially on a first sous vide cooker. They also include the nice sous vide cookbook full of recipes along with the Gourmia. 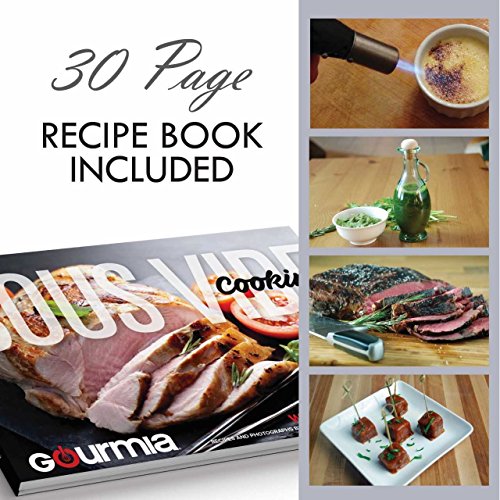