Forget the broiler and turn to sous vide for the most delectable London broil you’ve ever experienced. Whether using flank steak or top round, sous vide does wonders on tenderizing these naturally relatively tougher cuts of London broil meat. Keep reading for the best sous vide London broil recipe.

Flank steak is the traditional London broil meat and is my go-to steak when cooking for a larger party of friends at the house; particularly in the summer when I can finish it on the grill. It has such robust flavor and becomes nicely tender with a delightful bit of chew through the magic of sous vide.

The large flat shape gives it a lot of surface area for some great char, as well as lends itself to slicing up to serve easily for a party.

In this recipe, we cook the London broil in a classic A-1 style steakhouse sauce. We reserve some of that sauce to serve tableside for dipping. Think all of the great flavors of A-1, minus the goop.

If you find a strip of fat running along the side of the steak, we’d trim it to 1/4 inch thick or less before you sous vide; There’s no need to fret over getting the thickness of the fat even. Try not to cut into the meat when trimming.

If you’re dealing with an untrimmed flank steak, trim fat down to a quarter inch. Also remove the silver skin membrane, which will be on one side. The tip of your knife is a convenient and effective way to loosen the membrane. Use a paper towel to grip the membrane.

The basic premise of sous vide cooking utilizes an airtight bag submerged in water to cook at low temperatures for longer periods of time. This type of water immersion technique cooking method requires that sous vide foods are put into watertight tight sealed bags, devoid of as much air as possible.

There are two common practices to bag foods appropriately to cook sous vide: using a vacuum sealer or the displacement method.

A vacuum sealer is the optimal method to ensure all air is removed from the bag with a tight seal. You can find the right vacuum sealer for you here.

The displacement method is an effective and convenient method that can be used with Ziploc or silicone bags. After filling the bag with the appropriate food contents, you lower the bag into the water to displace the air out of the bag and seal on the follow.

Either method can be used for this recipe sous vide.

Our preferred time and temperature for sous vide London broil is 133°F (56.1°C) for 18 hours. Use 18 hours as a rough guidepost and adjust for what works best for your schedule. We prefer to stay in the 18-24 hour window. This time and temperature lead to a tenderized perfectly even rosy medium-rare finish.

Sure, you could cook it in as little as 2 hours, but extended sous vide cooks do wonders on naturally tougher cuts like flank steak and top round. The minimum time we like to use is 12 hours. The longest we’d go is 48 hours to further soften the mouth feel. See reference guide below to adjust the time and temperature to your liking.

Keep in mind the sear will raise the internal temperature ~3°F. We generally prefer 18-24 hours.

Searing is critical to having your steak be plate ready. Not only does the searing process add color to the dish, but also adds depth of flavor, texture and locks in juices.

The critical steps to get a great crust are:

The first step is easy to forget but crucial. Failure to pat the meat dry inhibits the Maillard reaction needed to create a crust. Seasoning the meat adds flavor and induces the crust. Lastly, using extremely high heat creates the crust.

The three methods we would suggest for the high temperature sear are:

You’ll want to sear for 1 to 2 minutes per side. The less time taken to reach your desired crust, the better. If pan searing, we prefer ghee (clarified butter) or a high smoke point oil such as avocado oil, but regular butter will do. Limiting to the sear to 2 minutes per side should prevent the steak from overcooking.

It requires marginally more work, but searing the steak for 30 seconds to a minute per side, 2 (or more) times each can add more color and texture and further prevent overcooking.

In the searing stage we’re doing our best to preserve the perfectly even doneness of the sous vide meat, while adding color, texture and taste to further its appeal.

Carving a flank steak or top round isn’t all that complicated, just make sure to cut against the grain to create a tender bite. Cutting with the grain will create extra chew. I prefer thin slices, at most half an inch thick, for London broil.

With carving we’re just aiming to maximize the tenderness by minimizing the chew.

Where to Find Quality London Broil

Flank steak and top round are common cuts that can often be found at the grocery shop but surely can be found at your local butcher.

As usual with steak, look for an even deep red color when selecting the steak. For a flank steak, make sure it’s a smooth cut free of membrane. Overly aggressive butchering will lead to signs of shredding versus an ideally smooth texture.

If you haven’t ordered online at Crowd Cow, I’d encourage you to try it. They have a large selection of high-quality meats and operate under the core tenents of taste, transparency and convenience.

If you’re new to sous vide, we have a great post on sous vide starter kits to get you going equipment wise. Below we summarize the essentials.

A sous vide cooker is the one piece of equipment that is critical to purchase to cook sous vide. It’s a portable machine that clamps onto a container to circulate, heat and regulate the water bath to the desired temperature.

You don’t technically need a separate container and can use any metal pot at home, but I prefer a sous vide container. They’re lightweight, transparent and designed with sous vide cooking in mind.

We’ve reviewed the best sous vide containers to help you find one that best meets your needs.

If you’re serious about sous vide, a vacuum sealer deserves serious consideration. A vacuum sealer will eliminate the vast majority of sous vide bag issues that can cause your sous vide cook to go wayward.

Bonus, it will benefit you well beyond sous vide and likely pay for itself in short order. Check out our research on the best sous vide vacuum sealers.

Not really unconventional, but if a cast iron skillet isn’t a part of your kitchen arsenal, it should be for sous vide. The heat retention of cast iron will go a long way in pan searing, which is the most common and versatile form of searing sous vide cooked food.

Lodge makes a great and affordable cast iron skillet. I’d go with an oversized searing skillet to accommodate larger cuts of meat, but a standard size searing skillet will do just fine in most cases.

Like most steak, we’d recommend red wine as a perfect beverage pairing for this meal. Reds with a medium tannin structure pair beautifully with the lean yet robust flavor of flank and top round steak; Malbec, Sangiovese and Merlot are great choices.

For a non-alcoholic option, use pomegranate juice on its own or for the base of a fun mocktail. 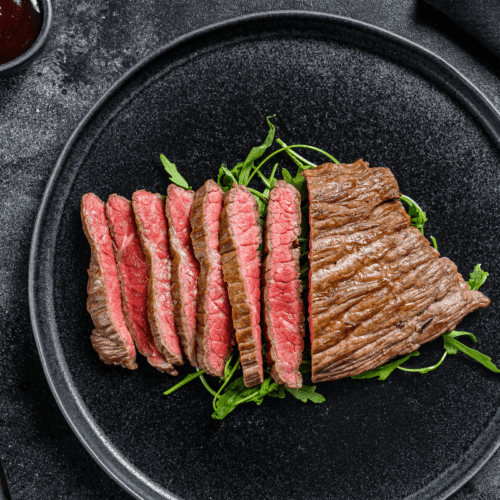 You can of course cook more than one steak at a time. Just make sure the steaks do not overlap (e.g. stack) in the sous vide bag. No matter which of the variety of cuts you can use for London broil (flank, top round, sirloin, etc.), the recipe instructions apply as is. We’d prefer flank steak finished on the grill if possible.
Keyword A-1, Flank Steak, Keto, London Broil, Sous Vide, Steak, Steakhouse Style, Top Round

Where Does the Name London Broil Come From?

From London, England obviously, right? No. This isn’t a known dish in England. Go figure.

London broil is an American creation said to have been concocted in the early 1930s in Philadelphia, PA and popularized in the 1950s and 1960s.

What is London Broil?

London broil is a type of preparation and cooking, not a cut of meat.

London broil comes from either the whole abdominal muscle (flank steak) or the rear of the cow (round or sirloin). The various cuts are rather lean and flavorful.

How long should I sous vide a London broil?

Will a sous vide tenderize a London broil?

YES. Particularly when sous vide for an extended period of time, such as the 18-24 hours we recommend. No other cooking method has the power to tenderize like sous vide, which makes it an ideal method of cooking London broil.

What temperature should London broil be cooked at?

If you’re in the mood for an interesting short read, see The Colonel in the Kitchen: A Surprising History of Sous Vide.