Skip to content
Disclaimer: There may be affiliate links, which means I may receive a commission if you sign up for a free trial or purchase through the links, but there is no extra cost to you.

Lobster tail is among the most popular and exclusive dishes to eat at a gourmet restaurant. Lobster tail is famous for its difficult cooking process, since the more you cook it, the harder its meat will become.

This sous vide lobster tail recipe will get you that gourmet taste at home. 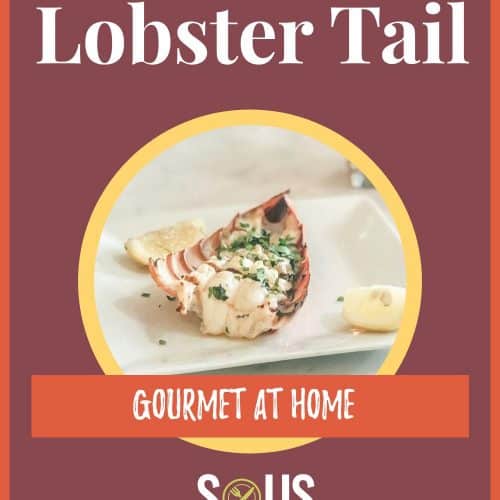 Lobster tail doesn't have to be an expensive restaurant-only meal. You can sous vide lobster tail right at home. We’ll use a live lobster, since dead lobsters start to liquefy their bodies leaving only the shells. Frozen ones have ice crystals that damage the lobster's meat.This recipe will entail cooking lobster tail at a low temperature to prevent it from becoming too hard. You'll end up with a super juicy dish.Keep in mind that this recipe could take you over an hour due to prep work with the live lobster.
5 from 1 vote
Print Recipe Pin Recipe
Prep Time 45 mins
Cook Time 17 mins
Total Time 1 hr 2 mins
Course Main Course
Cuisine American
Servings 1 person

Here is your sous vide cooked lobster, ready to be served on top of vegetable pureé or as a snack inside a sandwich.
Keyword Lobster, Seafood

Why I Sous Vide Lobster Tails

If you overcook them, they’ll be rubbery, chewy and pretty darn bad. Undercook them, and it’s a gooey mess. That’s why lobster tails are often cooked for longer than they need to be cooked, which makes their texture weird.

With sous vide cooking, you don’t need to worry about overcooking!

Sous vide cooking uses an immersion circulator which cooks foods at precise temperatures for long periods of time without any direct heat source. It makes sure everything comes out perfectly cooked every single time! Cook sous vide lobster tail is much better than grilled, boiled, or steamed lobster tail.

How to Choose Lobster Tails

Don’t worry so much about this process. You need to focus first on getting what you can actually afford.

Buy lobsters that are as fresh as possible. Look for dates on the package. Look for when it was packaged and/or a “best before” date that’s far away from today.

There are also frozen lobster tail options that you can get. As long as they were only frozen once and not refrozen multiple times, it’ll still have some of its freshness. If you thawed them out once already, it’s best to cook and eat it, rather than refreezing it.

If you’re able to get cold water lobster tails, they tend to be better quality than warm water ones. However, don’t worry so much if you can only afford warm water ones.

Why is Lobster so Expensive?

Overfishing has caused lobsters’ populations to dwindle, which has resulted in increased demand for them. Lobster prices have risen due to these factors.

Lobsters are also harder to catch, store, and keep alive than other seafood, like fish. There just aren’t as many lobsters out there.

Once considered a “poor man’s” food, today, lobster has become an expensive treat that requires a large budget.

A sous vide cooker is used to maintain the temperature of your food while it’s being cooked. The temperature is controlled by a thermostat inside the immersion circulator. The cooker will automatically turn off once the desired cooking time is reached.

The sous vide container is where you place your food during the cooking process, in a water bath. It helps insulate the food from the surrounding environment. This allows the food to stay at the same temperature throughout the entire cooking process.

The sous vide bag is used to create a vacuum seal around the food. This prevents water from coming into contact with the food. This keeps the food moist and tender. It’s best to vacuum seal the air out or use the water displacement method to get as much air out of a ziplock bag as possible.

A vacuum sealer is used to create the vacuum seal. Vacuum sealing ensures that no moisture escapes from the bag.

How to Remove Lobster Meat From the Tail

It may take some effort to remove the meat from the tail of a lobster. With these simple steps, you’ll be able to easily dip lobster meat pieces into melted butter without any mess at all.

Using kitchen scissors, carefully cut the underside of the lobster tail so that both halves come off easily.

Carefully separate the tail underside and lobster meat. You can use your fingers between the shell and meat to separate them.

The best temperature to sous vide lobster tail is between 130° and 140°F depending on the texture that you prefer.

For this recipe, I like to sous vide the lobster tail at 131°F because I prefer tender lobster meat. But you can always increase the temperature if you prefer a more meaty, traditional texture.

Check out some of the other popular recipes.