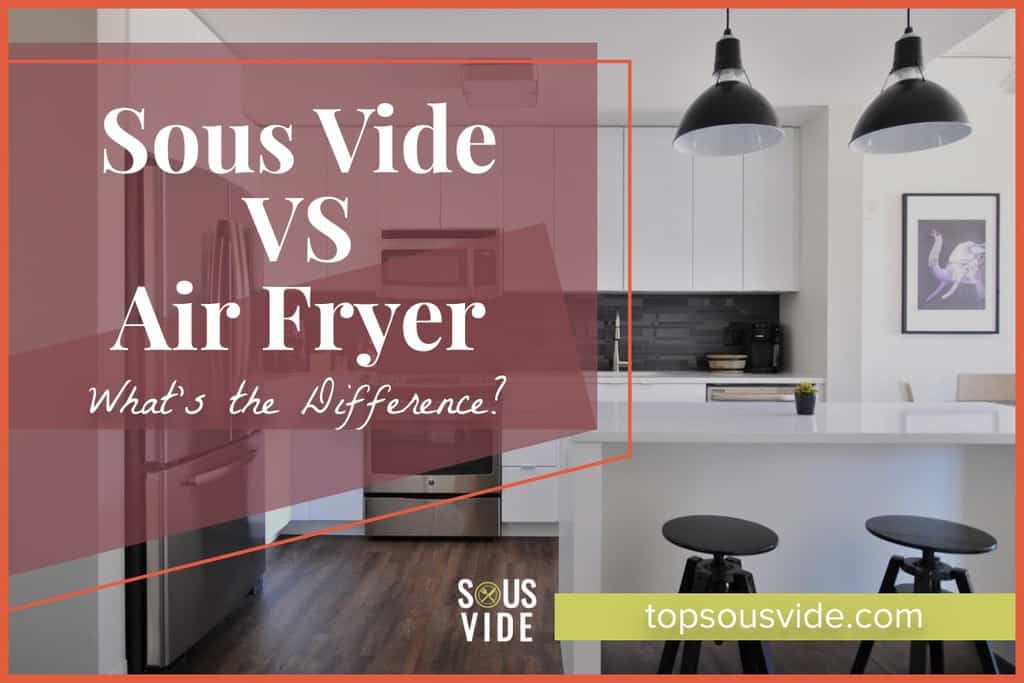 Sous vide cookers and air fryers are two of the most popular cooking appliances to make delicious food.

With sous vide, you have precise temperature control, so your food is perfectly cooked every time. Air fryers allow you to cook all sorts of food without the use of oil, giving you healthier meals.

Today we’ll compare Sous Vide vs Air Fryer in terms of their benefits and drawbacks so you can make an informed decision on sous vide cookers and air fryers. I’ll help you figure out what type of appliance will best suit your needs as a home chef.

What Is An Air Fryer and How Does It Work?

Air Fryers could be described as a cross between a countertop convection oven and a deep fryer. Using little or no oil, these appliances mimic the results of deep fat frying by blowing hot air around food that is held in a “fryer basket.”

Increasingly popular in American homes, air fryers are versatile devices that can cook all kinds of food, including roasted vegetables, fish, and fries, to name a few.

They have many attractive features that are similar to replacing several appliances, including fryers, steamers, and even entire ovens.

Some of my favorite foods to make are of course fried foods like french fries, chicken nuggets, and crispy-fried chicken skin. They can even do baked foods, like cookies!

They work by circulating hot air around the food held in the food basket. A heating element on top of the fryer heats the air and an internal fan circulates the heat around food. It is the hot air that crisps the food, giving it that “deep-fried” crispy texture and flavor.

Let’s take a look at some advantages and disadvantages of air fryers.

What Is Sous Vide and How Does It Work?

While sous vide has existed in one form or another since the 1700s, it has grown in popularity ever since professional chefs began to experiment with the method in the 1960s.

Sous vide first exploded onto the home market in the mid-2000s when the first domestic devices became widely available.

As the translation suggests, cooking sous vide style involves a vacuum sealer sealing the food in a sous vide bag. The ingredients are then cooked in a temperature-controlled water bath, usually between 120° F and 160° F.

Cooking food slowly is a great method for retaining the food’s natural flavor and producing meals that melt in your mouth.

Sous vide cooking differs from other slow cooking methods like slow cookers by offering precise control over the temperature and cooking time.

That leads to a number of benefits, as well as some disadvantages.

At first glance, sous vide and air frying seem to be two distinctly different methods of preparing food. However, at their heart, they both work on very similar principles.

Both these methods involve cooking by ensuring that heat is circulated evenly around the ingredients. Air frying uses hot air as the cooking medium, while Sous Vide uses water to achieve it.

Another similarity is that both are available as countertop devices that won’t take up an entire kitchen’s space.

The most obvious difference between the two methods is the temperature that is used to cook the food. Sous Vide relies on a long and slow cooking time at lower temperatures, whereas Air Fryers cook hot and fast.

The type of meals that both methods excel at is also fundamentally different. For example, cooking chicken wings using the sous vide method would still produce lovely, fully-cooked tender wings, but without the crispiness that makes chicken wings yummy.

Cooking a tenderloin or steak sous vide results in a meal that melts that simply melts in your mouth. You won’t get that from an air fryer. But an air fryer can give you a nice chocolate cake.

Sous Vide can also be used to prepare larger quantities of food, the only restriction is the size of the sous vide container that is used. Air fryers are restricted by the size of the unit and the cooking basket within it.

Both sous vide and air frying methods can be used to cook tasty meals, but there is no doubt that they both have their areas of specialty. No french fries from sous vide unfortunately.

Used to their strengths, both are handy appliances that can be used to create great meals for family and friends. Sous vide steaks with air fried french fries is a favorite.

If you want to compare sous vide to other cooking appliances and methods of cooking, check these articles out: