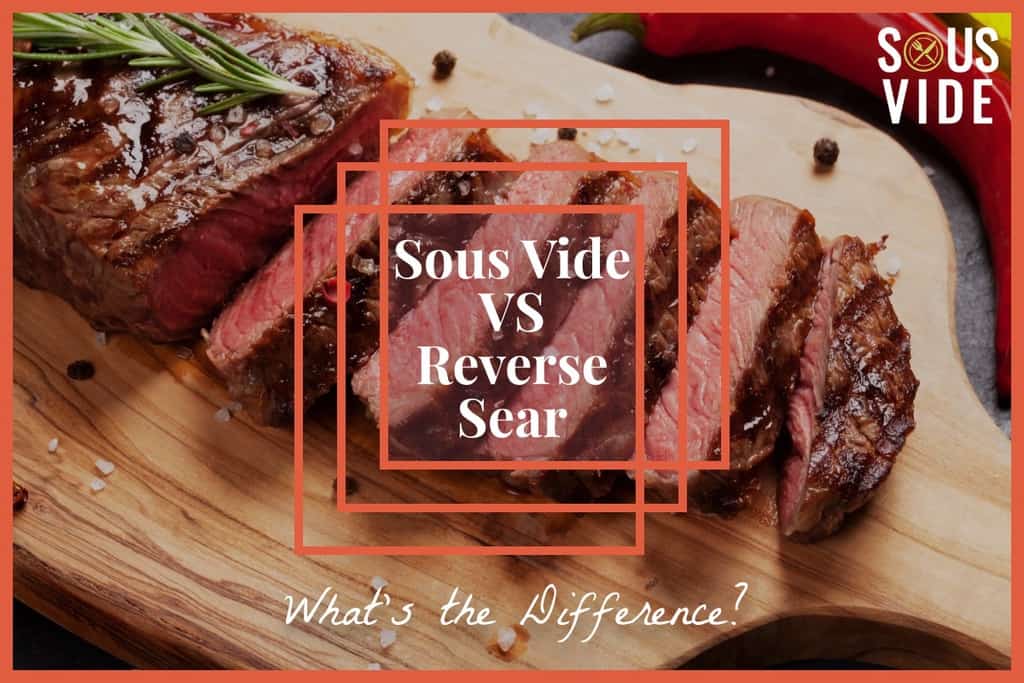 If you’re a meat lover, the debate between sous vide cooking and reverse sear cooking is an important one. They are two entirely different techniques that produce different results with high levels of flavor.

Sous Vide and Reverse Searing are two different approaches to cooking of steaks that have been growing in popularity over the past few years. They’re both cooking techniques that are often used in restaurants.

In this post, I discuss Sous Vide vs Reverse Sear: how they work and the pros and cons of each. Finally, I will have a look at where the methods are similar, and how they differ from each other.

How Does Reverse Searing Work?

I used to wait tables at a steak house, in a professional kitchen. It always amazed me how the chefs cooked the steaks to perfection time after time.

The common method they used was to “sear” the steak in an extremely hot pan and then place it in the oven until it was the correct doneness.

Reverse Searing, as the name suggests, is the exact opposite of Searing. The reverse sear method cooks the steak slowly on low heat in the oven until the right level of doneness is achieved, only then is the steak seared on a high heat.

This method is fantastic for producing steaks from medium-rare through to well done. Rare steaks are usually done adequately in a hot pan without the need to reverse sear, although it can be done.

The idea behind reverse searing is the increased control it gives cooks over a process known as the Maillard Reaction. This is the name given to the browning reaction that gives seared/browned food much of its flavor.

When you see a steak being served and the cooked edges look browned and delicious, you can thank the Maillard Reaction and food science.

To be absolutely precise with the doneness of the meat, it is better to start the searing process just before the steak has reached the desired temperature.

A general temperature guide is below. To achieve that perfect steak sear, sear the steak when the meat is a few degrees below your desired temperature.

How Does Sous Vide Work?

Sous Vide is a low-temperature cooking process in a water bath. Sous Vide translates to “under vacuum” from French and this is the other aspect that defines Sous Vide as a method.

In Sous Vide, the steak is sealed in a vacuum bag before it is immersed in a container of water to cook.

This process uses the temperature of the water bath to control the doneness of the steak and offers a precision that other methods struggle to achieve.

Although times can vary depending on the thickness of the steak, the table below is a guide to how to Sous Vide a steak to perfection.

A noticeable absence from the list is for a rare steak, once again this isn’t a method that lends itself to cooking rare steaks.

The method is renowned for producing tender steaks that melt in the mouth. The slow cooking process slowly melts the meat’s natural fats and these saturate the steak giving it an intense flavor.

The flavor is also intensified by the meat being contained in a vacuum throughout the cooking time, this means that no goodness or flavor evaporates as it cooks.

After cooking sous vide, you can do a quick, hot sear on all sides of the steak in a cast iron skillet to get that delicious crust to lock in the steak juice. You can also put the steak on a hot grill if you prefer that.

Just be sure to remove the surface moisture first before searing by patting it dry with paper towels.

Read more about the best sous vide machines in my other post.

Both these methods use a similar approach to cooking steak. Sous vide and reverse sear both have a searing component, and they also both have the ability to “reverse” cooking results. That is, with sous vide, you cook first in a water bath then sear after, so that you don’t lose any juices.

Both cook the meat slower than with traditional methods. This allows the steak to cook more evenly and results in a succulent and tender steak that you can slice through with a butter knife.

If you like a seared steak, then both these methods can be used to produce the same end result, with the only difference being the cooking method used to get them to the desired doneness first.

As I noted, both use a “slow approach” to cooking steaks. But the way that the steak is cooked slowly is the fundamental difference between the methods.

At its heart, Reverse Searing is still traditional cooking, with traditional equipment, only the order of the cooking process is reversed.

Sous Vide requires additional equipment and a little more time. It also doesn’t expose the meat to the elements until it is ready to sear (if searing is required).

Finally, although both rely cooking at a precise temperature, it’s much harder to precisely control the temperature in an oven. That means you’ll need to monitor the steak inside the oven throughout the cooking process to make sure the steak isn’t overcooked or undercooked.

Sous vide and reverse searing are two methods of cooking steaks that many fans have added into their cooking repertoire.

Both Sous Vide and Reverse Searing consistently produce mouthwatering, tender steaks, that are bursting with flavor and taste.

I do prefer the sous vide method myself as it’s easier to control the internal temperature of all pieces of meat using a sous vide cooker than an oven.

For more comparison of sous vide and other cooking techniques, check these articles out: