The Kitchen Boss sous vide cooker is brilliantly designed with its features and long-lasting build. The IPX7 waterproof sealing is impressive and won’t allow water or steam to seep inside to ruin it’s electrical parts. The quietness of the G300 and G310 is incredible, allowing me to have conversations in the kitchen. The 1100 Watts of power heats water faster than other circulators, allowing me to get to cooking faster. Kitchen Boss gives you all that and at a great price.

Let’s get one thing out of the way before we get into the details of the Kitchen Boss Sous Vide Cooker review.

The only difference between the Kitchen Boss G300 and the Kitchen Boss G310 is the design of the top of the circulator. The G300 is a 12-sided polygon, while the G310 is circular. All the other build specifications and features like the IPX7 Waterproof certifications are the same for both models. The prices are also the same on their Amazon store.

Keep that in mind as you read the details below, because when I refer to the G300, that also goes for G310. The only decision you’ll need to make will be whether or not you like the modern polygon shape or the clean circular shape. 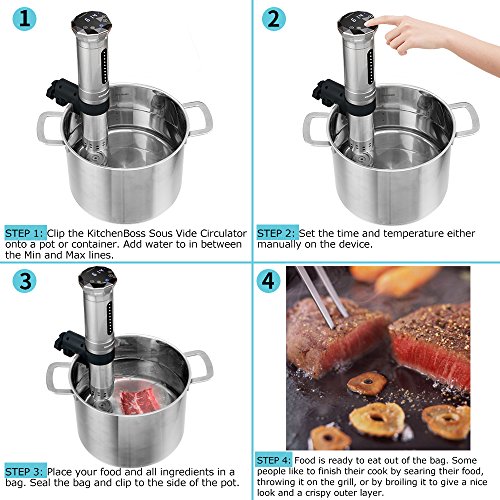 The Kitchen Boss sous vide cookers have many great features and these are the key ones that will give you a great sous vide cooking experience.

I’m going to start off with the IPX7 rating because if you’re anything like me when you first hear IPX7 Waterproof Certification and think it sounds impressive, but not quite sure what it really means.

The IP rating codes are a standard set by the International Electrotechnical Commission (IEC). You’ll see this rating on all sorts of electrical equipment and devices, including phones. The 7 means that a device can be submerged under 1 meter of water for 30 minutes. What does that mean for the Kitchen Boss cooker?

IPX7 gives me peace of mind that I can wash the circulator with no concerns of water getting into a crevice and damaging the Kitchen Boss sous vide cooker. I also don’t need to worry about steam vapors seeping through and ruining the device. Since sous vide will result in a large amount of water evaporation, the Kitchen Boss build will keep your device safe.

The Kitchen Boss is very quiet. There was barely any noise when running.

With 1100 watts of power, the G300 heats water faster than most other sous vide cookers. I usually get to my desired temperatures between 130-180 degrees Fahrenheit in 15-20 minutes.

Temperature and time setting is all done with its LCD touch screen panel at the top. Once the desired temperature is reached, the G300 will stay there. Kitchen Boss lists that it’s precise to 0.2°F / 0.1°C, but I average around 0.5 degrees, which is still highly accurate.

The clamp system securely holds the Kitchen Boss circulator with no movement, even while cooking for a long time. You just clamp it onto your container and twist to secure the plastic loop. Then you put the G300 in and you’re ready to start cooking. Watch this video to see how easy it is: 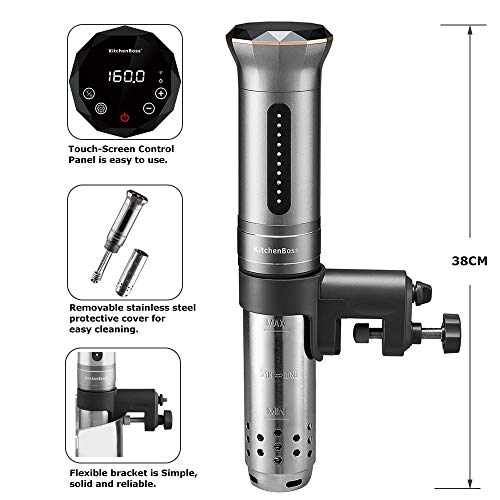 The Kitchen Boss G300 and G310 Sous Vide Immersion Cookers are well-built and look amazing. They feel sturdy and well-made.

Mentioned above, the G300 has the IPX7 waterproof rating. You only get that with its best of class waterproof electronics sealing technologies.

The G300’s main component is made of aluminum alloy to protect the high-precision motor, while also keeping it safe and silent. The parts touching the water are made of toxin-free SUS304 stainless steel and contain no plastic whatsoever. The body is also coated with piano mirror craftsmanship, so it keeps its sleek and modern appearance. The shell casing doesn’t get hot during operation either.

The weight isn’t a concern with the two-pin clamp system at the back of the G300 either. There’s a small pad on the clamp that secures the cooker in place. It’s well designed and no concern with the G300 slipping.

The LED touch display is simple and easy to use. The numbers are large and you’ll know what the temperature is at a glance. The function button icons are easy to understand with the main features selecting between Fahrenheit and Celsius, and increasing or decreasing the temperature.

The display is not angled, so if you’ll need to be nearby it to read the display.

The simple and sleek design and build of the Kitchen Boss cooker is attractive overall.

The Kitchen Boss G300 heats up incredibly fast with its 1100 watts of power. As mentioned above, I normally cook between 130-180 degrees Fahrenheit and I can get to that range quickly in 12-20 minutes depending on the exact temperature. The listed temperature range is 40°C and 90°C / 104°F-194°F.

It’s quiet the whole time and allows me to have conversations without yelling.

There is one thing worth mentioning that some tech-savvy people like. There’s no Bluetooth or Wi-Fi functionality, but that’s fine for me. I know that some people like being able to control the circulator from afar and like to see the status, but I’m fine with using my eyes to keep an eye on how things are cooking.

The G300 temperature variance for me is slightly more than their claimed 0.2°F / 0.1°C. My average was around 0.5°F and would be up to 1 degree, but that was rare. Occasionally, the temperature was within 0.2 degrees too. I’ve found that the bigger the container, the larger the variance, but again it’s not too much. Grab a thermometer and see what works with your containers or pots, because it might be different for you and the container’s material.

It doesn’t have all the bells and whistles of other circulators like the Anova ones, but it does what’s needed with precise water heating for perfectly cooked food. If you prefer to have things like wireless connectivity, get an Anova Precision Cooker.

Check out the latest prices Kitchen Boss G300 or G310 cooker by clicking the button below: 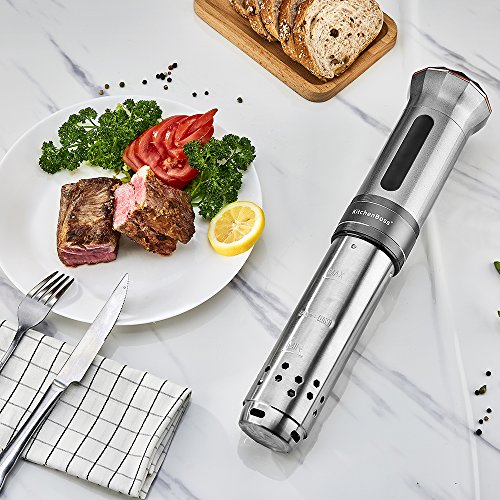 Why We Sous Vide Cook

Professional cooks will find everything necessary to achieve perfect results every day for their guests.

​The sous vide immersion cooker will give your meat and chicken the best flavor possible with many sous vide recipes out there. Imagine steaks with juices flowing that are cooked to precisely the temperature you like – every time.

3. GREAT ADDITION TO ANY RECIPE

The precision temperature and timing of sous vide equipment is your secret weapon to perfect recipes. Overcooking can result in loss of moisture and taste. Cooking with the sous vide enables you to cook steak, poultry, fish, egg, & vegetables.

Simply attach the sous vide cooker set to any cooking container or pot, add water, insert ingredients in a vacuum-sealed container, and press start. Sous vide also works with deep cooking pots that you already have laying around.

Hi there! I'm Mark and I’ve been a sous vide fanatic for a couple of years now. Friends have asked me lots of questions about sous vide, so I started this blog last year to help record my findings to share with them and all of you. Hope you enjoy it!